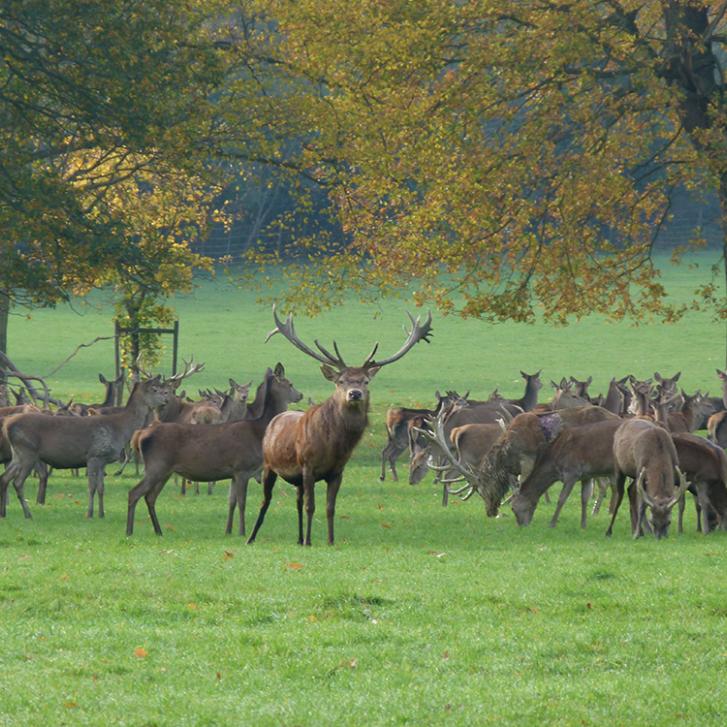 A brief history of venison

A brief history of venison

Here at Holme Farmed Venison we have been farming and supplying consistent quality venison for over 20 years now but what is the history of deer meat in the UK?
Meat from deer has been important in the human diet since prehistoric times. The term venison (from the Latin venari - to hunt) originally referred to meat from any wild animal.
There are now six free living species of deer in the UK but only the roe and red deer are native to our lands with the other species (fallow, Chinese water deer, muntjac and sika) all introduced over the years. Our farmed venison comes from the red deer which you will recognise as the iconic large deer in most images with the stags proudly bearing their large antlers. They are Britain’s largest land mammal and were once prolific all over Britain but are now mainly confined to the Scottish Highlands and managed parks and farms.
This is because centuries ago the Normans and Plantagenet’s divided England up into royal forests and prevented farming on those lands so that they could limit the hunting of the wild deer, boar and birds to just the elite. This coupled with increased population and farming meant that wild animals such as these became confined only to these areas. This carried on through the ages and meant that deer became a meat that was restricted to royals and rich landowning families on their estates and it became impossible for the ordinary Britain to eat venison unless they poached it - for which there were severe penalties. This is the reason that even today venison is thought of as a meat only for the rich.
Well not anymore……
Venison is the perfect meat and has become available to all. In fact, demand has increased so much over the last few years that it has almost outstripped supply. This is because people have come to realise how healthy venison is. Venison contains, gram for gram, less fat than a skinless chicken breast and has the highest protein and lowest cholesterol content of any other major meat. It is also completely sustainable and always free-range.
So why not try venison today and see what all the talk is about. You can buy a range of cuts from us here at Holme Farmed Venison, from versatile mince to special occasion venison racks – all of which can be delivered direct to your door. We are able to offer both wild and farmed venison depending on your tastes and if you are a little wary of venison then don’t be – see our article “Don’t be scared of venison” for all the tips on cooking and storing.
And if you would like to try other wild game meat we also sell wild boar cuts and seasonal game.
So why not give it a go today!
Share on Facebook Share on Twitter Share on Pinterest
We use cookies on our website to give you the most relevant experience by remembering your preferences and repeat visits. By clicking “Accept”, you consent to the use of ALL the cookies. However you may visit Cookie Settings to provide a controlled consent.
Cookie settingsACCEPT
Manage consent